At the Annual Meeting of the Vietnam Rivers Network held in Tam Ky (Quang Nam) on November 22, Dr. Dao Trong Tu – Head of the Vietnam Rivers Network (VRN), Deputy Director of the Center for Sustainable development and Climate Change adaptation (CEWAREC), Viet Nam has a dense network of rivers with thousands of large and small rivers. Associated with the river is an invaluable resource: water and aquatic resources, in addition to providing livelihoods for residents is an important means of transportation. Along with the economic and population growth, many of the country’s resources are over-exploited, including water resources.

The development of dense hydropower, which blocked the flow of almost all rivers, although providing a great source of power for economic development, has grown so dramatically that it has had a major impact on nature. and human. Changes in natural flow, increased flood risk in the rainy season and lack of water in the dry season due to non-compliance with the processes of the hydropower plants have occurred and caused social upheaval. Rivers of the river buckling themselves carry too much hydropower to make the environment deformation river basins.

In addition, the encroachment of rivers has increased, with serious threats to the river environment and biodiversity as well as the sustainable development of river basin communities. More industrial zones are opening up along with the intensification of urbanization, and the poor control and monitoring of waste water contributes to the many large and small rivers in most cities and countryside. The deterioration in the quality and quantity of water has been causing many implications for our own health and for future generations.

In order to protect water resources, VRN has implemented the model of water quality monitoring in Soc Trang city. This is the first model that VRN implemented in the Mekong Delta (Mekong Delta) by the WU. Le Thi Huong Lan, Chairwoman of Soc Trang Women’s Union, said that after six months of working, women’s members collected water sample information and sent the results to the Center for Water Quality Monitoring and Environmental Protection of the city. Water quality monitoring in Soc Trang city has attracted community participation in 4 wards collecting garbage, dredging ditches under canals and planting bonsai in the area. The Women’s Union has coordinated with the authorities of the wards to carry out communication activities to protect the environment and collect garbage.

In addition, Ms. Nguyen Thi Hong Van – VRN Coordinator, VRN Network Council has chosen to implement the project in different provinces in the management of water resources: Promoting Gender Factors in order to protect water resources of the Mekong River from the biofilm filtration and riverine riverine canals and canals constructed by the Ben Tre Initiative Group. In addition, the Can Tho City Farmers’ Union has implemented activities to raise the awareness of protecting the surface water of female members in Thoi Xuan Commune, Co Do District, Can Tho City. The Mekong Delta Youth Union (MDY) and the Women’s Union of Long My district (Hau Giang) use floating hyacinth to grow vegetables to adapt to climate change and prevent river pollution.

According to Assoc. Prof. Lê Anh Tuấn, deputy director of the Institute for Climate Change Research, Can Tho University, Vietnam is facing the situation of abnormal climate change and water scarcity in the coming time. Women, children, the elderly, people with disabilities and vulnerable groups will face many difficulties in accessing and utilizing water resources. Particularly, women, children, the elderly, and vulnerable groups are living in the Mekong Delta, which is also facing the decrease of sediment, fisheries production and salt intrusion. The Cai Lon – Cai Be Irrigation System has had a great impact on the livelihoods, aquaculture and the distribution of water resources in the Mekong Delta. These impacts will affect the sustainable socio-economic development and social security in the Mekong Delta in the coming time.

Therefore, the assessment of the role of women and men involved in water resource management, climate change adaptation, environmental protection and water source security needs to be properly considered and fully ensured. Specific analysis data is intended to provide feedback to the government in policy formulation and action planning for gender equality. Thus, these policies will promote the role of women and men more actively involved in the story of water governance and environmental protection, to improve resilience and adaptation to climate change. their livelihood and happiness.

Pham Dieu My, VRN member, Director of Center for Social Development Studies (CSRD) emphasized that Tam Giang lagoon is the main source of livelihood in Thua Thien Hue province. Of the poor, those whose livelihoods depend directly on natural resources. In recent decades, the low-lying coastal area has been severely affected by floods from rivers, the sea and heavy rains. 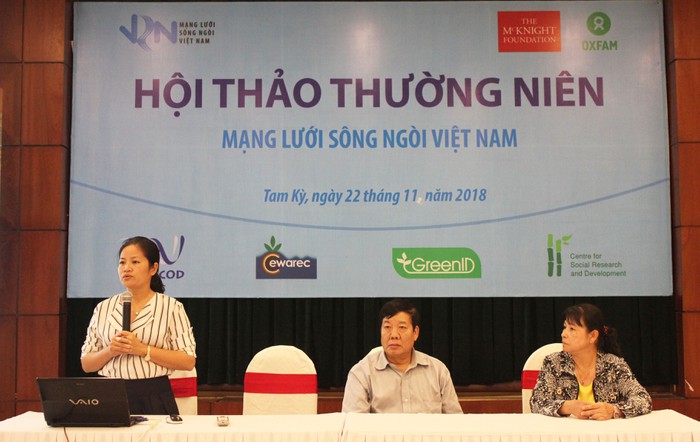 Ms. Pham Dieu My – Director of Center for Social Research and Development (CSRD)

CSRD has promoted women’s participation in disaster risk management (DRM) and climate change adaptation (CCA) through ecosystem-based (EbA) adaptation to rehabilitation, Conservation and sustainable management of mangroves in the lagoon area. EbA uses biodiversity and ecosystem services as an overall adaptation strategy. CSRD has planted about 5 ha of mangroves in Hai Duong and Loc Vinh communes.

In addition, the Women’s Union of Thua Thien-Hue province directly organized communication events on the topic of flood resilience and adaptation based on EbA ecosystem for nearly 700 women. Members of the Women’s Union have been involved in small-scale community-based ecotourism management training to create direct economic benefits from mangroves. In addition, microfinance funds that link to support women’s livelihoods and mangrove conservation are also established and put into operation. As a result, the flood resilience of 4,800 coastal residents has gradually improved.

Can Tho University (CTU) in collaboration with the Vietnam Academy for Water Resources (VAWR), the…

The Zeeland call to action