At that point, decommissioning (uninstalling
the power-generating capacity) and removing the dam become a

Multiple reasons exist to justify dam removal as the best alternative in some situations:

It can be difficult to manage the tons of sediment that have accumulated over decades. Under certain conditions, large amounts of sediments could be released quickly, affecting ecosystems downstream, choking river channels and causing flooding. Ecological benefits can then only be expected after a long term period. Breaching a dam can also recirculate pollutants that had been locked away deep in the reservoir. Dam removal is a complex, expensive engineering process that has to be done carefully. Agencies and engineering firms have been developing valuable expertise in dam removal, while scientists are collecting data that should help guide future decommissioning and removal projects. 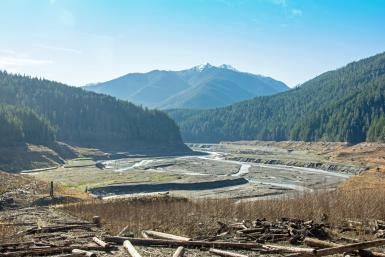 The Elwha River, Washington, at the site where the dam was removed.  Richard Goerg/Photographer’s Choice RF/Getty